Fruit tree plan - click for larger image
Apples:The apple trees were chosen to give a crop from early autumn right through winter. They were chosen so that their pollination times are fairly close together. Two standard trees have central place to grow up above the other trees and bushes as the canopy layer, and to give shade in the summer. The cordon is planted to grow up one side of an arch. The trees are listed below with their intended final size, rootstock, flowering time, use (D - dessert, C - cooker), picking time and storage time.Pear:
There is one mature pear tree in the garden already. It is very upright and doesn't take up much room. It has lots of flowers but doesn't set much fruit. I chose a cordon to give some extra fruit, but mainly to pollinate the existing tree. Because I don't know what variety the existing tree is this involves some guesswork.Cherry:Cobnuts / filberts:Quince - Agvambari
Mulberry - Black. These grow into big trees, but are slow growing. Might eventually compete with existing half-standard apple 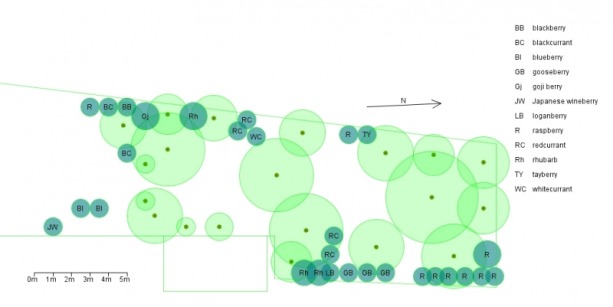 The plan is to increase the amount of soft fruit once the trees are a little bigger and we need less lawn space. I will probably start with some other currant bushes and hybrid berries to extend the fruiting season.

In 2009/2010 I added:
Currants:
Blueberries:
Raspberries (Glen Ample and an unknown existing variety from my neighbour) 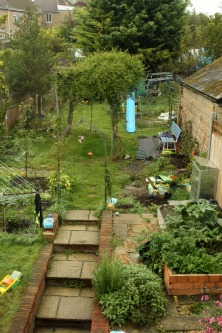 View of the garden from the South - summer 2009

I've been less careful so far in planning where to put herbs in the garden. I like experimenting to see what thrives in different places. Some of the first herbs I planted were sun loving rosemary, thyme and sage in some gravel on the hard landscaping near the house. These are now doing really well. They really like the well drained spot. The creeping thymes seem to do the best out of the different varieties. I also have a few lavenders on the left hand side close to the fence on a very chalky bit of soil. The English lavenders seem to do best.
I've planted a real mixture of herbs around the quince and Tydeman's late apple. A few varieties of mint - spearmint, ginger mint, applemint. The spearmint is very invasive as everyone says and I've cleared it back from the blackcurrant already. I've also got some sage that I transplanted here along with chives, catnep, salad burnett and bergamot. They all seem to enjoy each other's company.
I planted some lemon balm in the same spot but it suffered. I wasn't sure if it was from too much sun or the very chalky soil. I moved it into the shade of the pear tree in a spot with some richer soil where it is now thriving. It is next to some sorrel and anise hyssop which did well last year. The sorrel lasted right through the winter, but the anise hyssop is struggling to survive the slugs this spring. 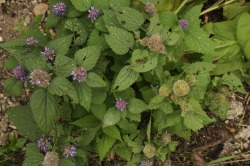 Anise hyssop
I grew a lot of nasturiums last summer too, a bushy variety and a climbing one. I've saved a lot of seed from them both and have replanted some this year. I've also read that chives are good for keeping apple scab at bay so I am planting some under my older apple tree which suffered quite badly last year. 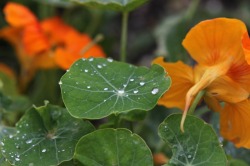