Because the garden is on a slope the soil is shallow, only about 0.15 - 0.30 m deep in most places. Below that is chalk. The plus side is that the soil is well drained. The down side is that the pH is higher than most of the books recommend for growing fruit. However, I have read that apples are especially tasty grown on chalk. I was a little worried that the trees would dry out because the soil is so well drained, but the summer has been so wet this year (2009) that it hasn't been a problem.

I have noticed that some of the trees have been slow to grow and the Annie Elizabeth apple has hardly grown at all. Its leaves have had green centres along the veins and are yellow along the outside. A bit of reading around pointed to lime-induced chlorosis. It seems that the high pH caused by the chalky soil means that the plants can't access the iron and manganese in the soil. I realised that digging holes for the trees caused quite a lot of chalk to be broken up and mixed with the soil, making the problem worse. 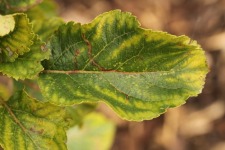 Lime-induced chlorosis on Annie Elizabeth apple (Malus domestica)
There seem to be a few approaches to improving matters. The long term approach is to include more organic matter in the soil to reduce the pH. Some literature suggests digging in organic matter in one part of the root space of the tree so that some of the roots can access the trace minerals. There are also mineral supplements that can be added to the soil or even into the trunks of affected trees. Foliar feeds are another way of getting these trace minerals directly into the leaves where they are needed. 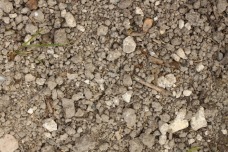 Chalky soil
I've been adding organic matter as mulch around the trees, from homemade compost, farmyard manure and bark chippings. I've also been using an organic foliar feed based on seaweed.  I haven't seen this make a big difference yet, but I think that is because I started after all the leaves had developed already. I will try again next spring on all the fruit trees, although I recently read that Apple scab is caused by moisture on the leaves over a long period, so I will have to be careful when I use it. I have also added some trace minerals to the soil in the form of rock dust - I like the idea of a mini ice age! Again, it's a case of waiting and seeing what effect it has, although I haven't done a controlled study. Hopefully as the trees develop their roots and the soil is dug less, the problem will fix itself.

Update 11 April 2010 - The apple trees are just beginning to come out into leaf now - they have survived the winter at least. I'll post an update once they are out to compare against last year.

Update 26 May 2010 - The leaves are out now on the apples trees. The Annie Elizabeth is looking much healthier this year. There is still some yellow towards the edge of the leaves, but nothing as extreme as the picture above. I have used an organic foliar feed a couple of times this season, but at a fairly weak concentration. The soil is much richer and is heavily mulched with bark chippings. I also put a metal hoop from an old barrel planter around the base and buried it in the soil to make sure there is no shortage of iron. Whether it was the result of these changes or the tree adapting to its environment and developing mycorrhizal fungi, it seems to be working. 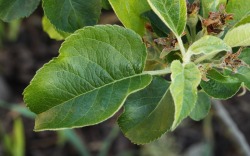 Same Annie Elizabeth apple tree as above one year later
Update 04 Jan 2011 - I've recently been using well composted chipped Lleylandii as a mulch added onto the top of the soil to lower the pH. I cut back some large trees that had grown much too large and used a shredder to reduce them to small chips. I left them in a large pile and added some water and nitrogen containing material (urine see blog for more). The heap composted quickly over a period of about 3 months. To be on the safe side I waited about 6-9 months before using it as mulch to make sure that most of the resin had decomposed.

Update 28 Aug 2011 - The tree now seems to have adjusted well to its environment. I'm not sure how much the mulch etc has helped, but the tree now shows no sign of lime-induced chlorosis. In fact the tree is growing well and has two huge apples on it this year.

To see how the garden has developed since check out the blog and the gallery. There is also a plan of the garden here and more information on the garden and forest gardening. 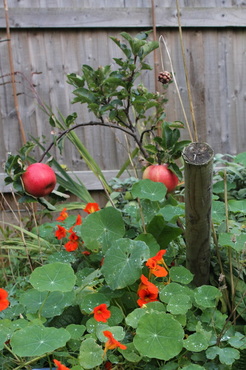 Different apple rootstocks have different abilities to cope with varying soil conditions. For example, in "The Fruit Garden Displayed", Harry Baker says that the M9 (very dwarfing) rootstock needs a good soil and cannot tolerate neglect or competition. Most books on growing fruit say that MM106 (semi-dwarfing) is suitable for a wide range of soils, including light ones. In Robert Kourik's "Designing and maintaining your edible landscape naturally" it specifically says that MM106 will tolerate alkaline (high pH) soils.

I have planted apple trees on a three different rootstocks (MM111, MM106 and M26). The MM111 and MM106 were chosen for standard trees and for one cordon. I would have chosen MM106 for all of them if they had been available in the varieties I wanted. Of the two standards, the one on MM106 is growing away quicker than the MM111 tree after two years. The two M26 trees have had mixed fortunes. The Annie Elizabeth has struggled as detailed above, although I suspect part of the reason is a less-than-perfect graft which is swollen. On the other hand the Redsleeves has thrived growing strongly and producing a good early crop in 2011.

I hadn't realised that some varieties are also better able to cope with alkaline soil, but after some recent discussion (Jan 2011) on the Forest Gardening Yahoo group I found out that there are some. The following varieties have been reported to do well on chalk soils: Barnack Beauty, Barnack Beauty Sport, Barnack Orange, Charles Ross, Crawley Beauty, Gascoyne's Scarlet, Hyslop (crab), Miller's Seedling, Red Charles Ross, Red Miller's Seedling, Saint Everard..